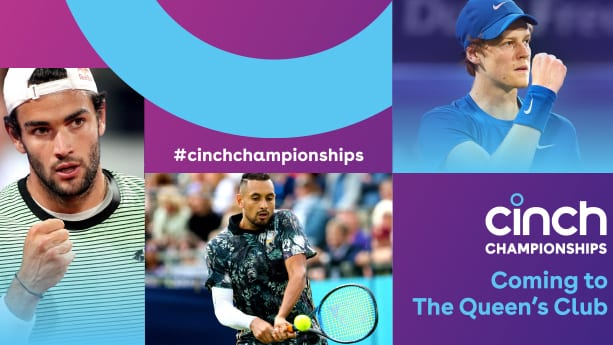 Two of the most exciting players in the world will compete in the LTA’s cinch Championships for the first time alongside a wealth of established favourites at The Queen’s Club.

The entry list for the tournament – one of the LTA’s major summer events – revealed that World No.9 Matteo Berrettini and 19-year-old Jannik Sinner intend to make their debuts.

Berrettini recently reached the final of the ATP 1000 event in Madrid, won the title in Belgrade and helped Italy to the ATP Cup final at the start of the year. He has some pedigree on grass also, having won the title in Stuttgart in 2019 and then moved on to the last 16 at Wimbledon that year.

“I have a heard a lot about the cinch Championships at Queen’s and always wanted to play there,” said Berrettini. “I have played some good tennis so far in 2021, and hope that I can bring my best game to the grass. If I do, I think I can go far on the surface.”

Sinner was just 7 years old when Andy Murray won his first title at The Queen’s Club, but like Murray he is achieving big things at a very young age.

The Italian is ranked 17 in the world, has already won two ATP titles (Sofia and Melbourne), and reached the final of the recent ATP 1000 event in Miami.

“I’m really excited to be competing at Queens for the first time,” said Sinner. “So many great players from the past have won the tournament, I heard the quality of the grass courts is incredible, and I can’t wait to play on them.”

Tournament Director Luiz Carvalho, said: “To add new players like Matteo and Jannik to our player field is really exciting, and I know our ticket-holders will enjoy watching them. With so many fan-favourites also entering, we are looking forward to the start of the cinch Championships more than ever.”

The doubles and qualifying lists will be announced in the coming weeks.