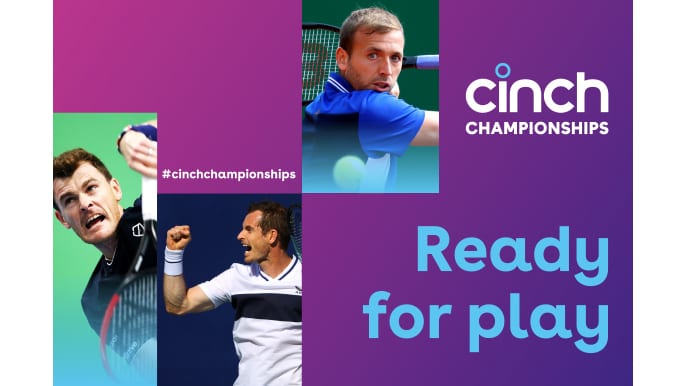 The cinch Championships will return as part of the LTA’s summer of grass court events, and some of the biggest British names in men’s tennis will be competing at The Queen’s Club, 14-20 June.

In singles, record five-time champion Andy Murray and British No.1 Dan Evans will be vying for the title, and in doubles the 2017 champions Jamie Murray and Bruno Soares will be back.

“It’s been such a difficult time for everyone and it will be great to play in front of home fans in Britain again,” said Murray. “The tournament at Queen’s has always meant a lot to me – it’s where I won my first ATP match, I’ve won the singles at Queen’s more than any other in my career, and I’ll never forget our doubles title in 2019. I can’t wait to get back out there.”

Evans is enjoying the best period of his career so far. At a career-high ranking of No.26, he recently reached the semifinals on clay in Monte Carlo, beating Novak Djokovic along the way. Perhaps at his most comfortable on grass, Evans is excited about what lies ahead.

“I know how lucky we’ve been to be able to still play the sport in recent months, it’s been a good year for me on court, and I’m really looking forward to the grass over the next couple of months,” said Evans. “It’s a surface I’ve always liked, and to be able to play at the cinch Championships at Queen’s in front of British fans again will be brilliant.”

Jamie Murray won the doubles title alongside Bruno Soares in 2017, and reunited with the Brazilian this year, immediately winning a title together in Australia in January. They can’t wait to return.

“Playing on grass at the cinch Championships is always special, but I think we will appreciate it more than ever this year after Queen’s and Wimbledon were cancelled in 2020,” Murray said. “Winning the doubles title in 2017 was a great moment for us, and we’d love to do it again.”

Luiz Carvalho is the new cinch Championships Tournament Director in 2021, and was delighted to confirm the participation of Evans and the Murray brothers.

Carvalho said: “Dan has put together some fantastic results over the past 12 months and it will be very interesting to see him on grass this year. Andy and Jamie’s records speak for themselves, we are really thrilled to have them back and we know the fans will be also.”

The full singles entry list will be revealed next week with the doubles and qualifying lists announced in the coming weeks.

The cinch Championships will be able to accommodate approximately 25% of its normal full capacity, and the event will be socially distanced, in line with the current safety protocols required by the UK Government and the ATP Tour.