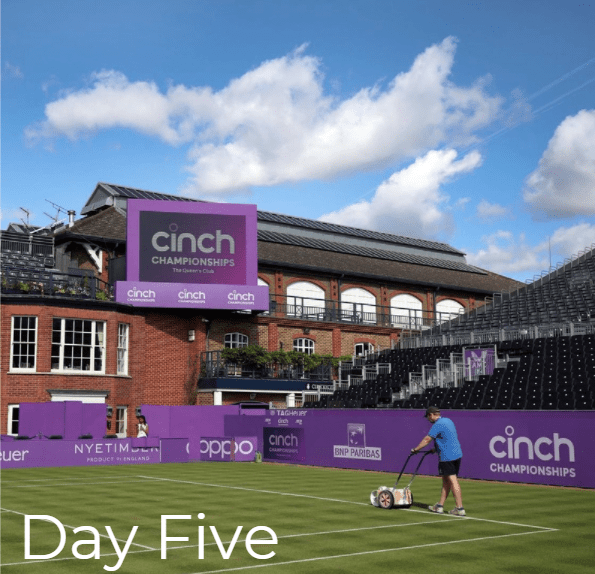 First of this year’s quarter finals at Queen’s this year saw Alejandro Davidovich Fokina face Botic van de Zandschulp on Centre Court. If the weather wasn’t enough to warm the crowd up today, the first set certainly was as the Dutch player stormed it 6-2. The Spaniard kept the scoring close in the second set but ultimately van de Zandschulp remained on top, taking the match in two sets (6-4 in the second). He booked the first semi-final place of the cinch Championships 2022.

Defending Champion Matteo Berrettini stepped out onto Centre shortly afterwards to face America’s Tommy Paul. The first set was fairly evenly matched with Berrettini clinching it 6-4, but the American was not down and out just yet. Into the second set and with a couple of breaks of serve in the bag, Berrettini was on the up. Tommy Paul was tiring and Berrettini pounced. 6-2 in the final set to the defending champ – semis here he comes!

With the crowd in high spirits following Berrettini’s triumph, the last remaining Brit in the singles competition Ryan Peniston would take to Centre to play Filip Krajinovic. With the full force of the crowd’s support behind him, Peniston claimed the first set 6-4 and looked hungry. The Serbian came to compete though, and won the second set 6-3 to take it to a third set for the first time on Day Five. Both looked strong, but despite the crowd’s support Peniston began to falter and the Serbian took full advantage. 6-3 in the final set to Krajinovic meant Ryan Peniston’s very successful Queen’s performance so far had come to a heroic end. With a wild card granted for Wimbledon, we’ll be Peniston in action again very soon, and we hope to see him at Queen’s again in future. Congratulations to Krajinovic who claims a semi final spot.

As the day’s heat subsided, the Centre court crowd welcomed Marin Cilic and Emil Ruusuvuori. A tie break for the first time today proved that this match could go the distance as the two were well matched. After it fell Cilic’s way (7-2), the seventh seed looked dominant going into the second set but Emil Ruusuvuori wasn’t going to give up. Could there be a third set for the final action of the day’s play? Cilic was determined and claimed his semi final place with a 6-4 win in the final set.

Another fantastic day at The Queen’s Club as spectators enjoyed the sun and we have our cinch Championships Semi Finalists – see below tomorrow’s order of play!