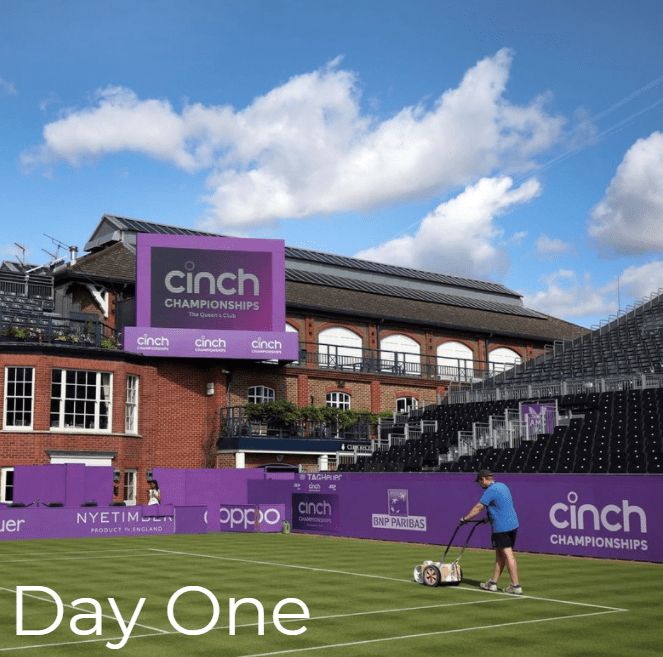 With the weather on our side, we were delighted to open our gates to spectators flooding in and returning to a full capacity site this year, after a two year hiatus.

Day One played host to a fabulous line up, including British hopefuls Jack Draper, Cameron Norrie and Liam Broady.

The first clash of the day saw Reilly Opelka take on Alex De Minaur with the latter coming out on top to claim the first win of the cinch Championships 2022 and his first top 20 win. A brilliant achievement.

Next up was the first of our British boys, rising star and wild card, Jack Draper against the fourth seed Taylor Fritz. After some fantastic displays of first-class tennis, Draper clinched the victory in straight sets against the American – 6-3, 6-2.

Third match of the day on Centre Court was a big one – Grigor Dimitrov v. Cameron Norrie. The standard of tennis was jaw-dropping – no surprises there with those two on court. After taking the first set 7-6, Norrie looked strong. But Dimitrov came back in full force to win the second and third sets 6-1, 6-4.

Last up on Centre, wild card Liam Broady faced Marin Cilic, battling hard to take it to three sets. Although Broady couldn’t come away with the win, what a fabulous showcase of what British tennis has to offer.

A fantastic day at Queen’s as the dust settles on Day One.

Keep an eye on the cinch Championships Match Centre for regular score updates, results and those all-important daily order of plays.