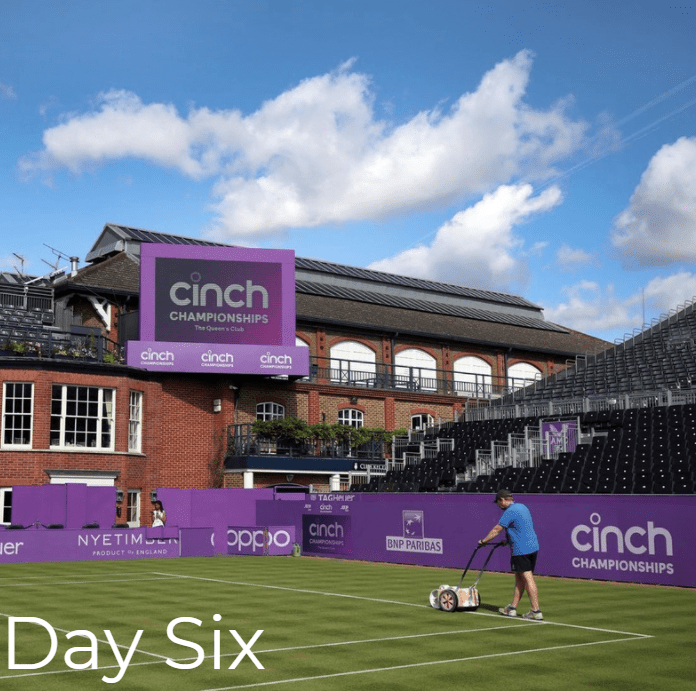 Although the temperature had dropped for the weekend’s play, the buzz around The Queen’s Club certainly had not as we headed into semi-finals day. Matteo Berrettini and Marin Cilic, two former Queen’s Club winners, would battle it out on court today for a place in the final in their respective matches.

Last year’s Champion, Berrettini would face Botic van de Zandschulp first and whilst the Italian was favourite to take this tie, you don’t get to the semi-finals of Queen’s easily as the Dutchman proved. The first set fell to the second seed, 6-4, after a close battle. Into the second set and Berrettini continued to dominate leaving van de Zandschulp to play catch up. The Italian’s focus did not waiver and as he took the second set 6-3 and booked himself into the cinch Championships 2022 Final for the second year running. It was looking like a promising tournament for the defending Champion.

The main battle on Day Six was the weather as intermittent rain showers threatened play throughout the day.

Despite the weather, the second semi-final of the day got underway after a slight delay as Marin Cilic met Filip Krajinovic on court for the first time in their careers. Cilic was the firm favourite heading into this clash but Krajinovic was looking determined to earn his first ATP tour title after four runner-up appearances. That determination (and some fantastic tennis, of course!) won him the first set 6-3. Cilic was making his sixth semi-final appearance at Queen’s so could experience bring him back into this game? As an unseeded semi-finalist, Krajinovic had nothing to lose and threw everything at his game to overpower Cilic, which proved enough as he won the match in two sets taking the second set 6-3 again. Consistency is key at Queen’s – could he carry it forward into the final against Matteo Berrettini?

Doubles next on Centre as Lloyd Glasspool and Harri Heliovaara took on Rohan Bopanna and Denis Shapovalov. The wild card pair from the UK and Finland looked strong and had support from the crowd to take the first set 7-5. However, the rain reappeared at the start of the second set and play was suspended, to eventually be called off for the evening, leaving the conclusion of the match to be decided on the final day.

PLEASE NOTE: The second doubles’ semi-final will resume at midday tomorrow, followed by the singles’ final, not before 1.30pm.