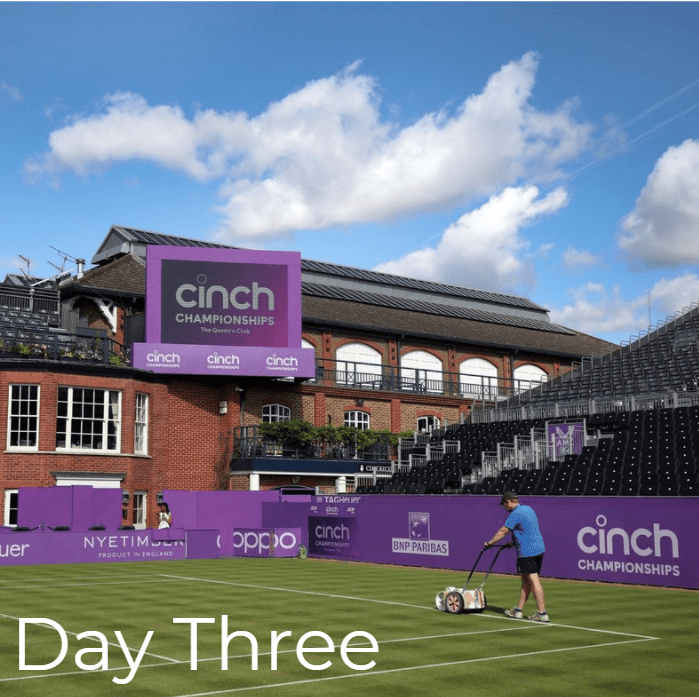 A packed schedule on Court One for Day Three as this year’s doubles competition kicked off.

First up saw two Brits on court, but on opposing sides as Rajeev Ram and Joe Salisbury faced Jamie Murray and Bruno Soares. With Salisbury in fine form recently, could he pair up with Ram to see off the formidable partnership of Murray and Soares? There was nothing between the two pairs in the first set which finished 7-6 after a tie break in Ram and Salisbury’s favour. Point for point continued into the second set which saw Murray and Soares take a slight lead but Salisbury and Ram fought back to steal a nail-biting tie break, 7-6 again. To top it off, Joe Salisbury received a great big cake in celebration of his 150th match at the #cinchChampionships. Fantastic achievement!

A real upset on Court One followed, as sixth seed Denis Shapovalov was knocked out 4-6, 6-2, 4-6 to Tommy Paul after yesterday’s play rolled over to today.  At his highest world ranking of 15 at just 23 years of age, Shapovalov looked sharp but just wasn’t able to fight back against Tommy Paul whose faults were minimal.

Fan favourite and former Champion here at Queen’s, Grigor Dimitrov would take to centre court again and see Botic van de Zandschulp as his opponent. The Dutchman has already surpassed his wins total from last year (20) and reached World Number 29 on 16 May so a worthy opponent against Queen’s regular Dimitrov. With some cracking shots early on, the Bulgarian was looking good but van de Zandschulp wasn’t going to make it easy and didn’t allow Dimitrov to get into his stride. The first set was as close as it gets, going to a tie break, and falling the way of the Dutchman who continued his early dominance into the second set. Momentum was firmly with van de Zandschulp which proved enough to see off Dimitrov, 6-3, and book his place in the quarter finals.

After a fantastic performance on Monday to knock out Taylor Fritz, the crowd welcomed Jack Draper onto Centre Court again, this time facing Emil Ruusuvuori. The Finnish player took the first set comfortably and it looked as though it could be an early exit from the day’s play for Draper. However, he fought back extremely well to take the second set to a tie break – could he force a third? Ruusuvuori was on fine form though, and managed to pip Draper at the post to take the win in straight sets. With an astonishing rise of 160 places on the world rankings from last year, Jack Draper will be one to watch and we certainly hope to see him at Queen’s again in the future.