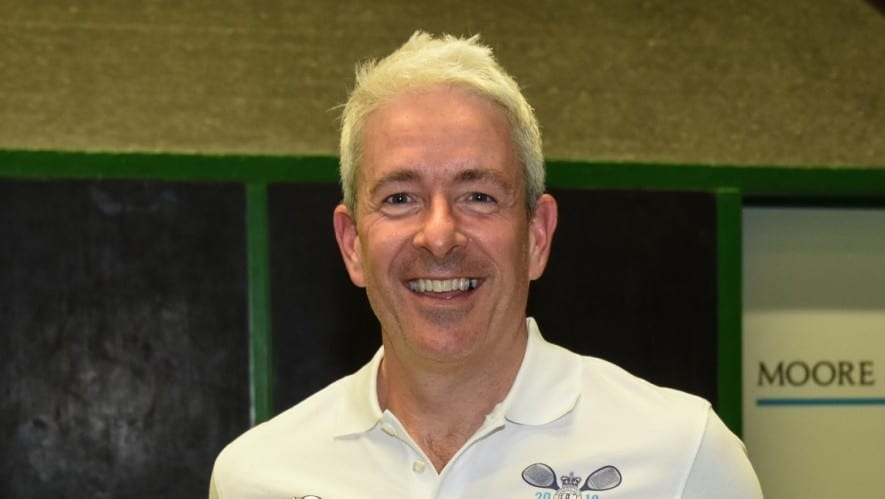 The unthinkable became possible and then at the very end inevitable on Saturday afternoon at Queens.

For the first time in nearly a century, an Open World Singles Champion has reclaimed his title. In front of a packed crowd, with match tickets quickly becoming a ‘must have’ during the extraordinary twist and turn of events on court on Thursday evening,  Rob Fahey MBE, wound back the clock and two days before turning 50 years of age, granted himself the most wondrous birthday present.
With many wondering how Camden would come out following his fall on Thursday evening, and concerns about his ankle, it was Rob who repeated his heroics of the previous matches, by storming to a 4-0 lead. This was clever play, as he was forcing the Champion to change direction, twisting and turning continually.  A true Champion though, Camden weathered the storm, and at 4-1, sent out a glimmer of hope to all those supporting the American to retain his title.  Slowly and steadily, Camden rediscovered his belief and his form, and changed the fortunes of the set. The tenth set was all about Riviere, who took all 6 games on the trot, and in doing so, was making Rob look suddenly out of sorts, and the player who didn’t know where the next point was coming from.  The ninth set took 50 Minutes, the tenth just 18 Minutes, such was the sublime play from Camden.
After 10 hours of play, the match was square. 5 Sets all, with all to play for.  Camden had the momentum, winning the previous 10 games, with Fahey on the back foot.   Fahey took the first game of the 11TH set, with each player going ahead by a game.  This was tense stuff for all those watching.
Then the match changed. Fahey, with all those years of experience, not too dissimilar of a certain Roger Federer in tight finals, began to slowly but surely slow the match. He was taking his time between points, and asked Andrew Lyons, marking the match to clear the balls, all biding time, and taking the momentum away from his opponent. This was a masterpiece in gamesmanship. He calmed the court atmosphere, which seemed to play into his hands. He knew Camden was struggling with his serve, and Fahey, by playing to his strengths exposed this, and slowly but surely ramped up the pressure and was relentless in his pursue of the finish line.
The twelfth set will go down in history, as the set that clinched the title for Fahey. At 5-2, Fahey, and his supporters could sense victory. With Riviere not able to turn the game back around, he saved a Championship ball. But on second Championship point, Fahey sent a backhand into the winning gallery to win the match. He fell to the floor, perhaps in sheer disbelief at what he had achieved. Then he stood, raised his hands and dropped his racquet. Twenty four years after becoming World Champion, he was World Champion again.
Camden played his part in this historic match, and was unfortunate to lose on a court that does not suit him but showed the heart and class of a Champion, and as a result gained a new legion of fans. At key points in during all three matches, where Fahey’s fans were particularly vocal, the level of sportsmanship displayed by Camden was admirable.
Rob cemented his standing as the greatest real tennis player of all time by reclaiming the world championship title two days before his 50th birthday. Not only has he now captured the title an unpreceded thirteen times, and all eyes will now be on how Camden reacts, as he has many titles during the year to retain, one of which is the British Open, here at Queen’s in November, where we look forward to his return to the Club.  I am sure there will be much interest in seeing whether it is possible to recreate matches of the standard witnessed last week in 2020, where ever the world championship is held.
The match was marked by Andrew Lyons, the best in the game, and who was marking his ninth consecutive World Championships.