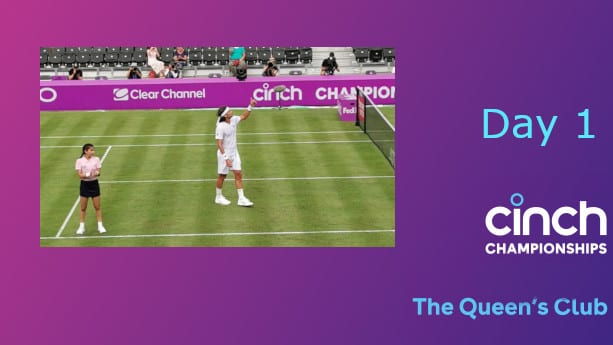 On day 1 of the 2021 cinch Championships and the hottest day of the year so far, we were treated to some amazing tennis. Having waited 722 days since the 2019 Final, we were all ready.

First on court was Jack Draper against the fearsome Jannik Sinner, and what a start this match was. Sinner came out blazing and initially went 4-0 up. However, Draper found his feet coming back to win 7-6(6) 7-6(2).

Up next was Cameron Norrie facing Albert Ramos-Vinolas. Another beauty of a match, we were treated to a 3 set display.  Cameron Norrie came out on top with his first win here at Queen’s. 4-6 6-3 6-4

Defending Champion Feliciano Lopez was on next. Two years ago he was crowned Singles Champion and Doubles Champion. Illya Marchenko was hoping to stop him from doing the same again. Lopez started the match strong, taking the first set 6-1. The second was a different story, Illya Marchenko dug in and made life difficult for Feliciano. It was not to be. Lopez capitalised on a late mistake during the second set tie break. 6-1 7-6(6).

The final centre court match had two Queen’s debutants facing off, Aslan Karatsev vs Alejandro Tabilo. Who would have thought we would end on such a high! A brilliant match to watch! Looking forward to watching more of Aslan Karatsev, he will be facing Cameron Norrie in the next round. 3-6 6-4 6-2