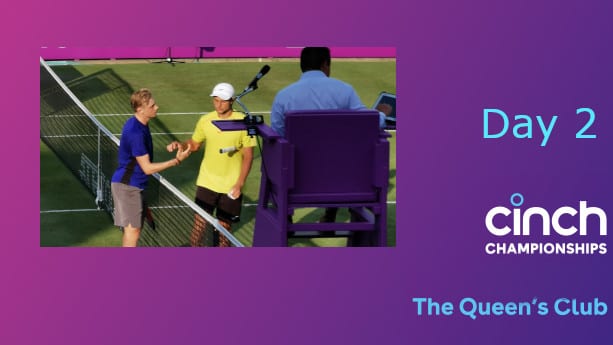 It just keeps getting better and better. After a brilliant first day, we were treated more centre court action.

Battling it out first were the two Italians. Top seed Matteo Berrettini facing Stefano Travaglia. Travaglia started as the stronger going 0-3 up initially, before conceding the first set tie break. Travaglia started the second set just as strong breaking Berrettini first service, it was tight all the way ending in another tie break with Berrenttini victorious.  7-6(5) 7-6(4)

Up next was Alexei Popyrin facing British No 1 Daniel Evans. Evans was definitely the crowd favourite, cheering his every point. Everyone was on their feet at the end of the second. This was Dan’s first win here since 2014! 4-6 4-6

Benoit Paire had the pleasure of facing defending Doubles Champion and 5-time Singles Champion, Andy Murray! Following the injuries and numerous recent setbacks, there was a collective nervousness watching Andy diving across the court. Following one tumble, Andy wrapped up with little drama.  3-6 2-6

Last up qualifier Aleksandar Vukic faced Denis Shapovalov. What a fight they had! After another hot day in the sun, the crowd were thoroughly entertained. Shapovalov needed all his tricks and his powerful served did not let him down.  6(6)-7 6(6)-7.