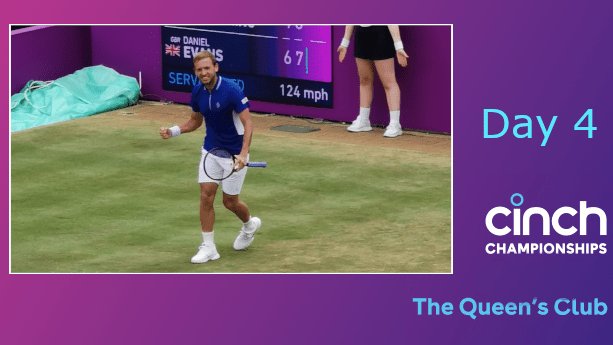 Day 4 got off to a nervous start, overnight rain and lots of grey clouds threatening to spoil what had started so brightly at the beginning of the week.

Could Adrian Mannarino stand in the way of GB’s No 1, Dan Evans? Evans glided through the first set, with some impressive winners. The second proved tougher. Mannarino was not going to give this to Dan. Eventually, Dan managed to break through and preventing the third set. When asked who he would rather play next, his answer? Andy Murray. 4-6 6(7)-7

Next, we had top seed Matteo Berrettini against former World No 1, Andy Murray. Murray, always a crowd favourite and even more so this year following his emotional words on Tuesday, has won the Championships a record number and would be hoping to extend that even further. Italian Berrettini showed his class and why he deserved to be top seed, beating Andy in two sets.6-3 6-3.

Another former Champion, Feliciano Lopez, was on court next against the young Canadian Denis Shapovalov. Denis did not face a single breakpoint. Always a shame to lose Feliciano but this will be Shapovalov’s first QF at Queen’s! 2-6 3-6.

With Viktor Troicki planning to retire later this year, could he end with a bang and trip Frances Tiafoe. It could have been closer, the second set had could have fallen his way. Unfortunately, for him, Tiafoe denied him. 3-6 6(3)-7