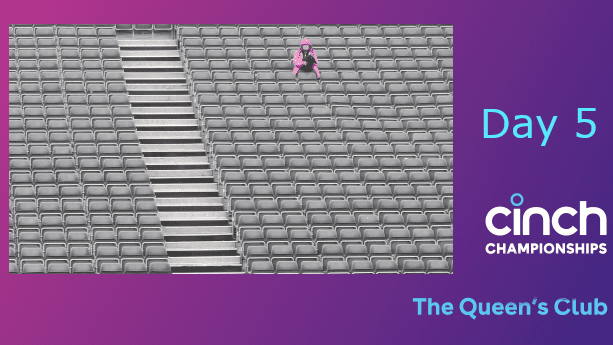 Amazing we got any play after the amount of rain we had! The rain just never let up.  Until slightly before 4, with the wheelchair matches been pushed inside, the already doubles postponed. All that remained were the 4 Centre Court matches.

Our first match of the afternoon included top seed Matteo Berrettini and GB no1 Dan Evans. It was a thriller! The perfect reward for the crowd who had endured such a soggy day. Berrettini’s massive serve is such a formidable weapon, this afternoon it caused Evans all sorts of problems.  7-6(5) 6-3

The second Centre Court QF was an all British affair. No 2 Cameron Norrie vs the young Jack Draper. Draper had an impressive start to the week, knocking 3rd Seed Jannik Sinner out in his opening match and then Alexander Bublik. As the grey evening set in, Norrie broke early and then took the first with another break. 6-3 6-3.

In the last QF Frances Tiafoe will resume against Denis Shapovalov after play was suspended 3-6 0-0.